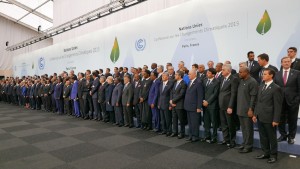 At the UN climate change conference this week, Syria announced that it will sign the Paris Agreement on climate change. The Syrian government has not quite finalised targets for cutting greenhouse gases, but will do in due course: ‘We are in the process of becoming part of the agreement. We will have our commitments and targets.’

The territory formerly known as Syria is currently under control of at least five military factions, including Islamic State in the east, the Turkish army in the north, and anti-government forces just outside Damascus. Major cities are entirely destroyed; there is no national economic plan and no national economy, yet, shortly, a Syrian representative will submit targets and commitments for the cutting of CO2 emissions.

When they enter into climate change negotiations, leaders leave their populations behind. They enter a different sphere and a new way of doing politics, which deals not with human needs or priorities but with technical or naturalised targets. Climate change provides a post-political and technocratic language, through which deals can be done and relations negotiated. To sign up to the Paris Agreement, or to support the ‘2° target’, is to enter into an intra-elite pact. It is like an initiation to an exclusive society, where you assume different priorities and take on a different worldview. Your loyalties to your secret society (your international obligations, international contributions) take priority over and occlude one’s obligations to domestic populations.

The international sphere now has some similarities with the situation for absolute kings in ancient times: the political relations are those between leaders, not between leaders and populace. The international sphere is a plane for political relations between leaders, which occur relatively independently of their respective peoples. Climate change features as the ideology of this sphere, not because of a natural emergency, but because the issue represents, in essence, the negation of the national political sphere. It is global not national, natural not political.

Countries’ submissions laying out their planned CO2 cuts (their Intended Nationally Determined Contributions) make strange reading. A country is described – its geographical position, economic resources, industries – but the framing is from an estranged, alien point of view. Elements of human and geographical reality are described only for the reason of explaining targets for the reduction of CO2. All of a national reality is viewed from the point of view of the amount of gas produced; it is seen from the skies, from a perspective that would not be recognisable to the people in that country.

A country’s ‘contribution’ to the world becomes, not its inventions or production of ideas or products, but its limitation on the production of a gas. CO2 becomes the mediator in international political relations: it is the asocial currency, the means by which one national reality is made comparible with another.

This worldview is not just indifferent to people’s priorities; it is, loosely speaking, the opposite of them. Fiji’s contribution document regrets that the ‘addiction of modern society to individual transport options’ has led to an increase in car ownership, and that ‘engine size distribution is moving in the wrong direction for energy and emissions savings’. A country with a per capita GDP of US$4000 dollars sees the modest increase in the private motorcar as obstructing its ‘international obligations’.

Of course, there is horse-trading over economic interests at the climate change conference. The world is divided into two groups of countries: those who must contribute towards the Green Climate Fund, and those who receive these funds. Poorer countries are pushing for more climate relief money and for a review of richer countries’ failures to meet past climate targets. Richer countries are resisting. Turkey is complaining that it is in the wrong group, claiming that it should receive climate funds rather than be asked to contribute.

Yet here, socio-economic problems or goals are discussed only indirectly. Relations of economic competition, or exploitation, can only be understood through the medium of CO2. Countries relate through the intermediary of the skies, as the emissions from one part of the world rain down in the form of hurricanes or flooding on another.

Human ends are only sought as the side-effect of natural ends. Aid becomes ‘climate relief’, not tackling human need but tackling the ‘effects of climate change’ on poorer regions. The countries thrust to the forefront of negotiation are those who, through accidents of geography, are exposed to earthquakes, hurricanes or flooding. The poverty of those on higher or firmer ground is not so interesting: it has not been touched by natural intermediaries, but only those old profane socio-economic forces about which we have very little to say.

National domestic interests are not expressed or dealt with directly: they sit there silently, sullenly, at the back of the room. Germany is embarrassed by the fact that it can’t close its lignite mines or penalise its car industry. The things that matter domestically – cheap energy, jobs – are not the things that matter in these negotiations. Domestic economic interests are things to be whispered about in private. When the French president travelled to India, the leaders gave a joint press conference about the need to back the Paris Agreement and tackle climate change; then they retreated to private discussions about the export of French war planes. There is a public face and a private face.

There is nothing wrong in principle with an international negotiation about the global environment. One could imagine a situation, in some future world, where a committee representing the whole of humanity could come together to make decisions about the earth’s climate: to reduce CO2, to seed rain, to increase or reduce temperatures. These representatives would bear the wills and wishes of their respective sections of humanity, and the conclusions would be the outcome of these accumulated wishes.

This is not what we have. International climate change negotiations provide a new post-political sphere, which is not an offshoot of national peoples, but a different plane, insulated from and set against them.

A meaningful discussion about our collective influence on the climate could only be based on the realities and wishes of the world’s populations. Scrapping climate treaties would be the first step in bringing politics out of the sky, back down to earth – to the profane and solid ground of human need, reality and desire.