#Metoo: The criminalisation of sexual passion

Before a prostitute and a client have sex, they discuss in detail the acts that will take place. It’s a contract; there are clear boundaries that are established beforehand. Some of Harvey Weinstein’s assaults took a similar form: you do this for me and I will do that for you. This is a deal.

But the fallout from Weinstein, the #Metoo phenomenon, has targeted acts that have the precise opposite character: the unscripted sexual advance, or spontaneous displays of desire. Several people have lost their jobs because, at some point in the past, they came on to someone – they put a hand on their leg, or touched or kissed them without explicitly asking first. The defence minister resigned because he put his hand on a journalist’s leg 15 years ago. A freelance journalist lost his jobs because he ‘lunged’ to kiss a woman outside a pub.

These events are not just about men and women, and it is not just now. A couple of years ago an LGBT student representative, Annie Teriba, resigned after she was accused of non-consensual sex with another woman. She confessed: ‘I had sex with someone. The other party later informed me that the sex was not consensual. I failed to properly establish consent before every act. I apologise sincerely and profoundly for my actions.’ Teriba also admitted some ‘inappropriate behaviour’ in a nightclub two years’ previously, ‘where I had touched somebody in a sexual manner without their consent’.

We are seeing a new model for sexual relations, as aseptic, cool and contractual, not unlike that of a prostitute and her client. Everything must be discussed in advance and explicitly agreed, and the sex act becomes a playing out of the ‘deal’. The University of Michigan teaches that consent must be ‘verbal or oral, sober, and enthusiastic’, and must be continually obtained: ‘Each of us is responsible for making sure we have consent in every sexual situation… it is important to clarify what your partner feels about the sexual situation before initiating or continuing the sexual activity.’

People are seen as separate, bounded atoms, who do not naturally touch or relate. The ordinary sex act is conceived as a violation, a breaching of these boundaries, which is why it must be agreed so explicitly:

At the heart of consent is the idea that every person has a right to personal sovereignty – the right to not be acted upon by someone else in a sexual manner unless they give that person clear permission.  It is the responsibility of the person initiating the sexual activity to get this permission.

By these accounts, it is the person ‘acting upon the other in a sexual manner’ who has the obligation to get consent. This is not just an assumption of guilt – though it is that. It is also an assumption of separateness, the separateness of people and the contradiction of their interests.

This relieves the woman of responsibility for making it clear when she is not okay with something. There is a generation of wilting maidens who seem incapable of saying no: they say nothing, then they feel violated and write about it on social media afterwards. The woman who accused the journalist Sam Kriss of assault gave a detailed account of the evening in question, and at no point did she say ‘no’. She kept saying ‘not here, other people can see’, even ‘we might make the old folk jealous’, but she never said ‘no, I don’t want to’.

The turn against passion is not about prudishness: the contractual model is compatible with extreme sexual acts. Grindr arranges clear and explicit consent between gay men, with photos and specifics about preferred sexual acts. You can see what is on offer and discuss it beforehand. Similarly, the habit of men sending penis selfies to women as a chat-up line is a way of being explicit about their wares: this is what I’ve got, how about it?

Those accused of sexual assault for come-ons always admit a sinful and shameful lapse, describing it as ‘suboptimal’ or ‘absolutely unacceptable’ or ‘falling short’ of standards. Annie Teriba said:  ‘It is clear that I lack self-awareness and become sexually entitled when I am drunk’. What probably actually happened was that she got carried away: she wanted someone and that person may not have wanted her, but they did not make this clear to her. Yet her one-sided passion is posed as a sterile ‘sexual entitlement’, a sense of rights over another person, who is merely a means to the satisfaction of her sexual needs.

What is being lost here is the ideal of sensual unity – of romance, seduction, captivation. Since the discovery of love in ancient Greece, sexual desire gained this new possible meaning: as an act of devotion and entrancement. On the plane of passion there is a loss of separateness, the spiritual uniting of two people.

This new meaning of desire was quite different from the brute expression of the sex drive, whereby the other is a means to one’s own satisfaction. Passion is directed at a person, in their autonomy and integrity; the Greek suitors sought to win their love object, not to force them. When Homer’s Gods came down to Earth to ravish maidens, it did not matter whether the maiden wanted it or not, just as nobody cared what the slave girls thought as they were passed around and fought over like booty. By contrast, in classical Athens, the love object (generally a free-born courtesan or a beautiful youth) was not seized or ravished, but courted, seduced.

This distinction is the key one in defining sexual assault. Assault is a knowing violation of another; it is treating the other as an object, a means to satisfaction of your sex drive. (Indeed, it is sometimes independent of sexual pleasure and is a mere act of violence, or violation, where what is enjoyed is the reduction of the other person to the status of an object.) This was the manner in which Weinstein and other assaulters went about their business. This has nothing to do with passion.

After Greece, the realm of passion continued as a thread in social life, generally in the secrecy of extra-marital affairs, in the knight and his lady, or courtly love. 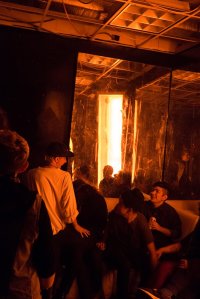 In spite of the current wisdom, sexual desire still has this meaning in spaces today. The artist Wolfgang Tillman’s photographs of nightclubs show how, within the four walls of a club, people are transcending their separation. There are hands everywhere – on someone’s bottom, between their legs, hands touching hands. In the sensuality of a nightclub, bathed in drink and music and light, people are no longer atoms. There are no longer boundaries; their separateness is transcended.

This is a beautiful thing. So no, people shouldn’t always ask before they kiss, and they shouldn’t apologise for wanting someone. If you don’t want to be kissed then say no, and that should be the end of that. Don’t post about it online. When you post, you are violating the space within which passion occurs: you are ruining it for the next time when you do want to be kissed.

We should be for the ideal of desire – and against the aseptic contractualism which is turning every man into a pimp and every woman into a prostitute.

My book Officious – Rise of the Busybody State, is published by Zero books.

One Comment to “#Metoo: The criminalisation of sexual passion”