On the narcissism of trans activism 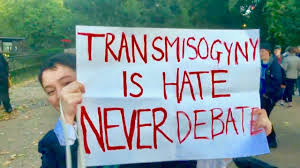 Is it ‘transphobic’ for lesbians to refuse to sleep with trans women? Should radical feminists be forced to see trans women as ‘real women’?

The growing conflict between trans activists and lesbians/radical feminists shines a light on today’s strange new breed of identity politics.

In a YouTube war, NeonFiona, a bisexual woman with a trans girlfriend, said that lesbians were downright bigoted for refusing to date trans women. Lesbian YouTubers and writers such as Arielle Scarcella and Taylor Fogarty responded with videos arguing that ‘Nobody should be coerced into having sex with anybody. If someone does not want to fuck you, it does not invalidate your identity.’

Meanwhile, radical feminists have been labelled TERFS (Trans-Exclusionary Radical Feminists) for not seeing trans women as real women, a conflict that occasionally spills over into real violence. At a recent feminist Hyde Park rally, a 60-year old feminist was punched and grabbed around the neck by an apparently male-bodied trans woman. The ‘punch a terf’ meme is a theme on Twitter, where TERFS are compared to Nazis: ’deck a terf’, ‘punch terfs. transpobes suck’, ‘have you punched a nazi or a terf today?’.

Trans people have been part of the gay movement for decades: this is not about transgenderism per se. Nor is it about most trans people, who don’t want to punch anyone. Nor is it about the misunderstandings that can occur when straight people change sex: these situations are not unprecedented. At my college LGB Society 20 years ago there was a woman who identified as a gay man. Everyone was welcoming of him but the gay men were not interested; they wanted men, biological men. The situation was a bit awkward but nobody made a big deal about it: it just was what it was. Sometimes in life people miss each other.

Now this same situation has become a political line, a matter of political principle, the source of demands and recriminations. Gay women’s rejection of trans women is treated as an invalidation of trans identity, based on prejudiced ‘cultural conditioning’ and irrational fear.

Today’s trans activism involves a kind of narcissism, a failure to distinguish between your own and other people’s point of view. Self-ascription is treated as an absolute right: you can call yourself whatever you want to, and people have to mirror and affirm it. If you say you are a woman then it is harmful for other people to not treat you absolutely like a woman in every respect. ‘It’s harmful to trans folks to associate lesbian with “vagina only”’, tweeted one activist. ‘You’re not an LGBT advocate if you think trans women who don’t have surgery or take hormones are not women.’ In the demand for recognition, there is a denial of the independence of the other person’s point of view.

But the truth is that the world is independent of us: it has its own eyes, its own logic. We may wish to be seen as a woman or man, just as we may wish to be seen as funny or attractive, but this cannot be demanded as a right. In reality, we are very rarely seen as we wish to be seen, and indeed this is not a bad thing. It is a reality check. It is just life. We can work to earn other people’s opinions but we can’t demand them.

Today’s identity politics demands that the world be a perfect mirror, that it reflect your self-ascription, that it never present a denial, discomfort or refusal. The argument that lesbians should have sex with trans women even if they don’t want to (that they should want to want to) shows how this demand for affirmation represents a violation of the bodies and wills of others.

There is a questioning of lesbians’ ‘preferences’ for the female body. NeonFiona’s video put ‘preferences’ in quote marks, which she made with fingers over her head. ‘”Preferences” are super transphobic’, read one tweet. The message of the video is: question your preferences, ask why you prefer the things you do, because it could just be pure bigotry. An article on Slate discussed lesbians’ ‘knee-jerk resistance’ and ‘feelings of fear or disgust at the idea of a partner who they perceive as “really” a man – feelings that are rooted in transphobic cultural conditioning’. It said that lesbians were even worse than cis-men for a ‘freak-out’ or ‘yuck’ reaction when they discover that the woman they are dating has male anatomy.

Here, people’s feelings and desires are placed in quote-marks, as prejudiced, conditioned, in need of re-education. It becomes legitimate to ask why you prefer the people you prefer. Why do you never date trans people, or black people, or disabled people? As if your love list should correspond to a diversity chart in order to be entirely even handed. The intuitive, personal issue of sexual attraction becomes something for others to comment upon and judge. As Arielle Scarcella put it, activists can be ‘aggressive in telling lesbians how to define their sexuality and how to feel in their attractions’.

Ultimately, the narcissism of trans activism comes from the fragile nature of the contemporary self – its lack of independence from the world. The person demanding recognition as a perfect mirror has no place apart from the world. This aborts the efforts in Western philosophy over the past 2000 years, which has sought the independence of the self from the world. In his Meditations, Roman Emperor Marcus Aurelius told himself not to be affected by other people’s stinky breath or the stupid things they say about you. The Stoic’s aim is remaining rooted in your person, master of your ship, regardless of what others say or do around you.

Self-identity now is reduced to the single dimension of a social mask: how you are seen, what you are called. This is why non-recognition can spark such upset and rage. ‘When terfs attack, we fight back’, tweeted one trans activist: feminists’ refusal to see trans women as women is experienced as a kind of attack, which calls for violence in return.

But behind the aggression and accusation lies the fragility of contemporary identity, which has no point upon which to stand.

I will be discussing ‘Diversity – Does it Matter?’ at the Battle of Ideas in London on 28 October.